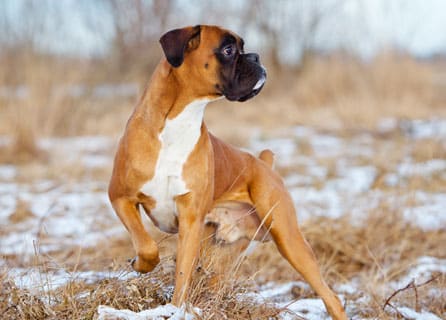 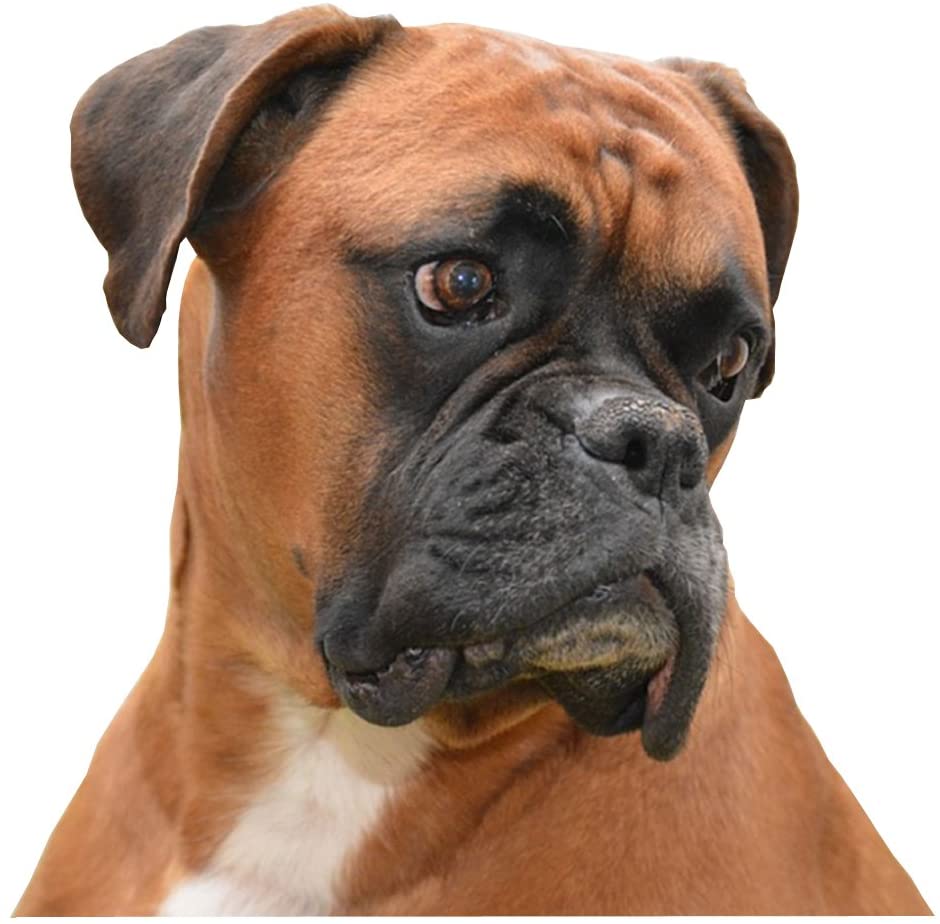 The Boxer is a strong, hardy, and energetic dog with an angelic soul and bright temperament.  Rottweilers are considered to be close relatives of boxers.  If the ancestors of these wonderful dogs hunted wild boars, deer and fought with bears, then modern dogs are real companions and true favorites of the family, especially children.  But not only families have appreciated the amazing qualities of the character of dogs, their intelligence, endurance, and obedience.  Many representatives of the Boxer breed serve in the army, police, customs, work as guide dogs and participate in rescue operations.  The animals’ amusing ability to move their front paws, just like boxers fight, explains the interesting name of the breed.  Although this is only a guess.

Description of the boxer breed

The boxer is a real athlete, full of energy, with an ideal physique.  It is believed to be one of the strongest breeds in the world.  Despite such a formidable description, boxers are better than many other dogs for families with children.  According to the breed standard, the German Boxer is proportionally built, has an impressively developed musculature, and a strong bone.  The lower jaw of the boxers protrudes, and the lips hang down at the sides, giving the muzzle a sad expression.  The slightly flattened nose is funny upturned.  Previously, the tail and ears of animals were docked.  However, in 2002 many European countries abandoned this procedure, so the standard was rewritten.  When boxers wag their tail, it turns out that the whole back is involved, which looks very funny.  The coat of the boxers is shiny and smooth, short, close to the body.  The most common is the red (deer) color of animals, the brindle color looks very beautiful, but white was not included in the standard, although sometimes there are albino boxers.  The muzzle of boxers of brindle and red colors is decorated with a dark mask.  White markings are allowed in color, but not more than 30% of the body surface – on the chest, abdomen, and paws, but on the mask, back and sides they are not desirable. 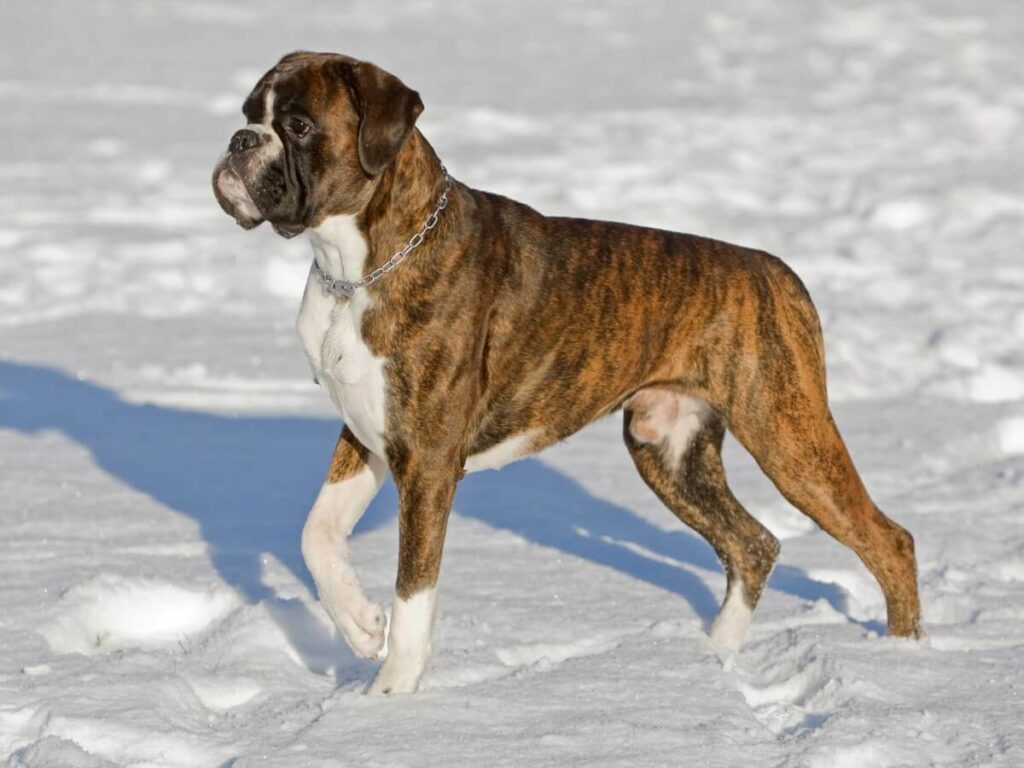 The Boxer is a real family dog, good-natured and playful, adoring, and protecting children.  This noble dog easily makes contact and appreciates the attention of all family members.  He does not like to be alone and is very bored at such moments.  If a boxer wants something, he will never bark or growl, he will try to use all his charm and some childish spontaneity to get what he wants.  And it works!  In most cases, strangers distrust boxers.  Although there are also such four-legged individuals who perceive strangers as new friends.  They simply adore the owner and all family members without exception.  The boxer dog considers it his duty to “help” the owner around the house.  And after exhausting walking on the heels of the household, do not mind to lie down next to them on the sofa.  A hooligan character and craving for games does not leave boxers even at a respectful age.  The German boxer gets along well with other pets that are part of the family.  But as soon as he crosses the threshold of the house, he perceives other animals as potential prey or enemies.  Do not expect from a four-legged bully, with awe about purring pets, the same behavior with other cats.  It will not be possible to avoid conflicts during walks when boxers are not averse to fighting with four-legged brothers of the same sex. 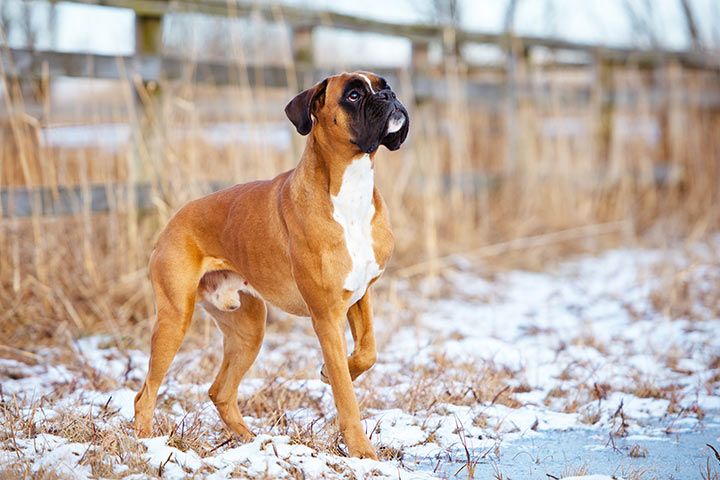 The boxer is an athlete by nature, which means he needs regular training and physical activity.  If the boxers are walked for several minutes, then all the animal’s energy will be directed towards providing a “mess” in the house.  A long morning and evening walk with the opportunity to run and play freely would be ideal.  But these are minimal exercises for keeping boxers in city apartments.  Despite the short coat, boxers are sensitive to heat, no matter how they tolerate it.  In summer, physical activity for the animal is limited and walked early in the morning or late in the evening.  There is a lot of trouble with boxers.  They will not disdain puddles and mud while walking, they will not consider it necessary to bypass the garbage dump.  The main thing is to have time to wash your pet, otherwise, all the dirt will be on the couch.  Boxers’ drool can be found all over the house.  If the pet falls asleep, even the neighbors can find out about it, lead the boxers, famous snorers.  So this dog is not suitable for everyone, especially those who love silence, peace, and order.  A boxer dog does not take long to groom.  The short and fine coat only needs to be wiped with a hard cloth or a special rubber massage brush.  Usually it is enough to carry out the procedure once a week, and during molting – every other day.  Boxers are bathed as needed, it is important not to overuse this procedure.  Animals’ ears and wrinkles are regularly examined and wiped.  The claws are trimmed as they grow back.But the eyes of animals should be closely monitored.  Dust, dirt particles, grass seeds, and other debris getting into the eyes, instantly irritate and redden boxers.  Therefore, it is advisable to keep special napkins in your pocket for a walk in your pocket, so that you can wipe them from time to time.  After a walk, it is advisable to wipe the eyelids with a damp clean cloth dipped in water or chamomile decoction.  There should always be an anti-inflammatory eye ointment in your veterinary medicine cabinet.  The boxer dog “does not complain” about appetite.  Smelling the smell of food, it begins to salivate profusely and it is ready to eat every last bite.  If you do not control the pet’s diet, deprive it of physical activity and feed it with excesses from the table, it will not be possible to avoid obesity.  The ideal feeding option for Boxers is high-quality dry food, selected according to the breed’s size, age, activity, and health status of the animal. 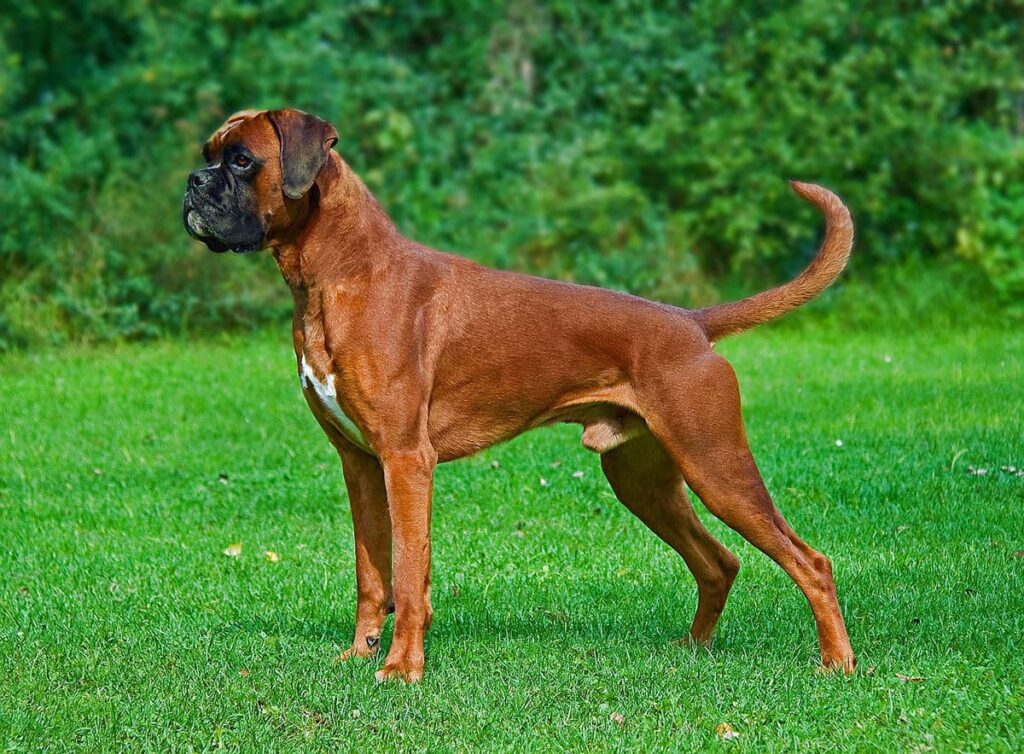 A boxer is very trainable, especially if the correct training tactics are chosen – “carrot”, not “stick”.  Encouragement with a treat and an affectionate word will have a faster effect on the dog than screaming or constantly tugging at the leash.  Working out with a boxer is a must.  After all, the boxer breed is considered very noisy and uncontrollable without proper training.  In addition to training, the German boxer needs daily physical activity.  Walking twice a day for an hour is just a warm-up.  Boxers need jogging, active games.  Pullers, flying saucers for dogs, all kinds of balls, ropes, or sticks are the most important attributes for walking with a pet.  They will allow you to have fun and at the same time train your pet.

A boxer cannot “boast” of excellent health.  The creation of the breed, the preservation of its appearance for 100 years, left its imprint in the form of several disorders: a high probability of developing cancerous diseases deafness in one or two ears in about 30% of the born puppies with a white color twist of the eyelids, corrected by surgery food allergy metabolic disorders  – bloating, hypothyroidism, intestinal problems, congenital aortic stenosis and dysplasia of the right ventricle of the heart, manifested in adult animals The average life span of boxers is 10 years.  According to research carried out in the UK, the causes of death were distributed as follows: about 39% – cancer, 22% – age, and 7% – problems with the heart or gastrointestinal tract.  Most of these cases are rare and treatable by meds for dogs. They could be bought in Online Veterinary Pharmacy.

In the photo, boxer puppies are incredibly funny, but in real life, it’s impossible to tear yourself away from them.  Considering possible genetic health problems, it is best to purchase a puppy from a nursery, rather than from hands.  A small German boxer can have not only latent diseases but also mental problems.  Usually, such animals are not allowed by professional breeders to breed, reducing the risk of genetic abnormalities.  If the puppy looks unhealthy, shows signs of aggression, or is frightened by the slightest rustle, the future owner will have to face many problems in the future.  Many serious dog breeds are not recommended for beginners, for whom this will be the first experience of dealing with four-legged pets.  But this in no way applies to boxers.  The boxer is so smart, non-conflicting, and perceptive that he will become an ideal friend and companion who will “help” the owner inexperienced in dog breeding.  Once having got an adorable boxer puppy in the house, you will fall in love with this breed completely and irrevocably! 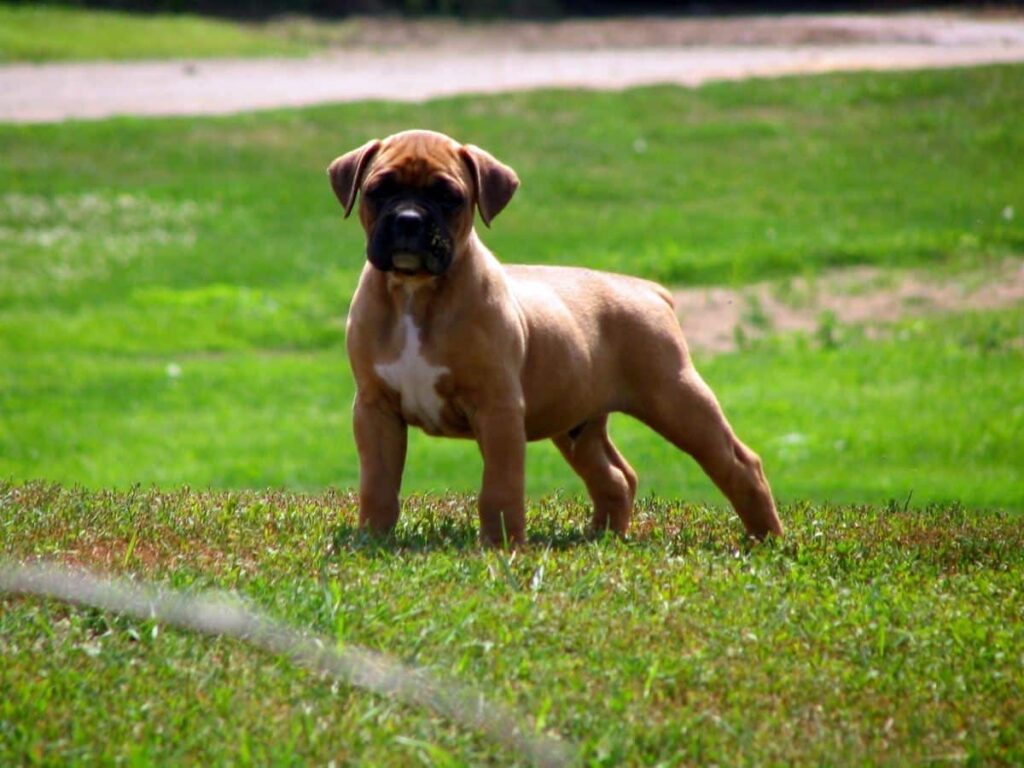 Here you can find a lot of Online Veterinary Supplies for your pet. There are not only toys and sports requisites in Online Pet Pharmacy, but also many other things.