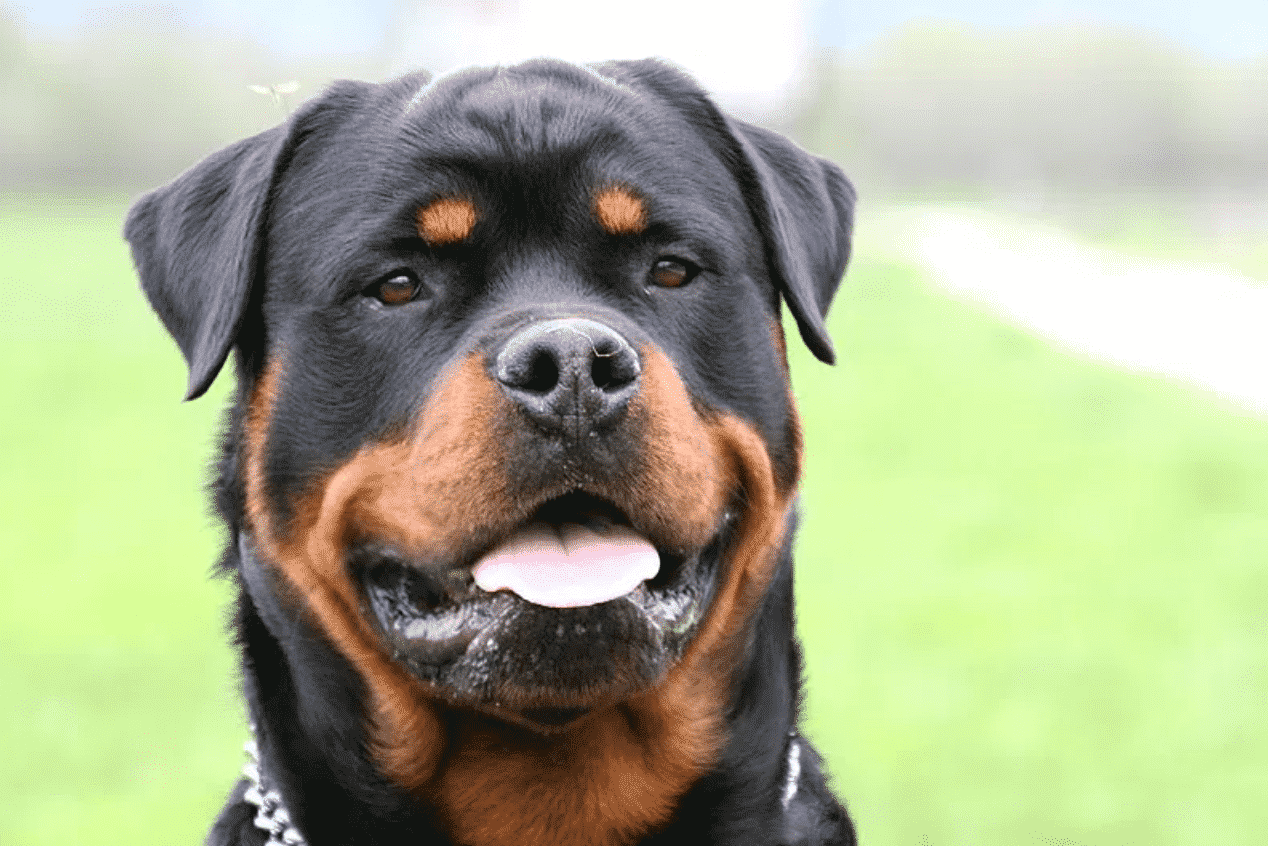 is a powerful and warlike breed that seems to many to be uncontrollably angry and dangerous.  You can hear a lot about these dogs from people who know almost nothing about them: “Such dogs cannot be trusted!”, “They have a death grip!”, “They are terrible and evil!”  The characteristics of this breed are detailed below.  What are these “wildly angry dogs” really?  In fact, it is enough to look a Rottweiler dog in the eye.  The calm and kind look of this hardy and noble animal will tell you a lot.  Any owner of this strong, fearless pet knows that there is no better dog for someone who appreciates calm strength and quick reactions, fearlessness, and discretion, and, most importantly, loyalty to the family and love for children.  The ancestors of the Rottweilers were in the service of the Roman legionaries.  For them, they guarded livestock and military camps at halts.  It was from the Romans that these warlike dogs learned fearlessness and discipline.  The physical type of the dog was formed as a result of long walks and constant tension: a massive head, a muscular neck, a straight and strong back, a calm and confident gait.  The breed was finally bred in the middle of the 18th century in the city of Rottweil (Germany), from which it took its name.  The Rottweiler is a service dog.  Since ancient times, this breed has been used as a guard, but over time, many other purposes have been added: police dog, guide, psychotherapist, rescuer.  These professions remain with her to this day.  During World War I, Rottweilers were also used as messengers.

Brief description of the breed Rottweiler

The Rottweiler is a sturdy dog ​​that is compact and proportional.  The main qualities characteristic of this breed are endurance, strength, and irrepressible energy.  The seemingly powerful and sturdy dog ​​should move easily and freely, without any signs of weight and clumsiness.  The approximate indicators of height and weight, which may vary somewhat, are for boys – from 61 to 68 cm and 50 kg, for girls – from 56 to 63 cm and 42 kg.  The most optimal growth indicators are the median values ​​of these indicators.  The head shape of a Rottweiler dog is divided into several types: light, heavy, proportional, and normal.  As for the most suitable, so to speak, ideal shape, this is the average length of the skull, the ears located at a sufficiently large distance, a pronounced transition to the muzzle from the forehead, and the frontal part of the skull should protrude moderately.  Another important indicator in the breed standard is the proportionality of the animal’s body and its head.  A distinctive feature of the Rottweiler is its wide and strong jaw, which provides the dog with an almost “death” grip.  The Rottweiler has a wide muzzle at the base, tapering to the tip of the nose, which should be black, with large nostrils and a wide lobe.  As for the teeth, in fact, the “weapon” of the Rottweiler, then there should be 42 of them, without damage, with the correct scissor bite.  Beautiful almond-shaped eyes should be medium – size and dark- colored.  The front edges of the ears of a Rottweiler should be close to the cheekbones, giving the impression of a wider skull shape.  Besides, the ears should be of a medium size, triangular in shape, set high and wide apart, creating a kind of straight line with the top of the skull.  Rottweiler’s coat is generally black and has unique tan or reddish tints.  The coat consists of the guard, topcoat, and undercoat.

The nature of the Rottweiler and his habits

The Rottweiler naturally has a calm character, balanced, efficient, and obedient.  Fearless and confident, but at the same time good-natured and loves children.  If a small child, under the supervision of adults, is allowed to approach the dog and allowed to play with it, feed it, then such a dog will be a protector, both for the child and the whole family.  The main thing is to explain to the child that the dog needs to be treated the way he wants to be treated.  Sentinel qualities are genetically inherent in Rottweiler’s character.  Therefore, it is very important, while engaging in education and training, not to overdo it with fighting qualities and aggression.  If a Rottweiler is supposed to live in an apartment with children, excessive belligerence can only harm.  A dog, first of all, must be obedient, educated, mentally and emotionally balanced, and show its fighting qualities only in critical situations when there is a direct threat to the life of the family in which the Rottweiler lives.  Unfortunately, some owners of Rottweilers believe that this breed should be angry and merciless, without disdaining the cruelest and violent methods of training in relation to the pet.  As a result, the Rottweiler’s character will be irretrievably spoiled, the dog will become aggressive, vicious, and insidious.  We have repeatedly witnessed the news when Rottweilers attacked even small children, inflicting severe injuries with their powerful jaws.  Such animals pose a threat not only to the surrounding people, and other pets, but also to the owner himself, when one “fine” day the dog does not like another kick and he will simply take revenge “for all the good” that the “beloved” owner did for him  …  Despite the negative facts, a well-mannered Rottweiler, raised with love and respect, is one of the best therapists, able to heal, delight and soothe those who need it, providing tremendous psychological support.  It so happened historically that at one time a Rottweiler – a shepherd, getting acquainted with the herd, subdued the most powerful animal, and then all the others.  A family that has decided to start such a wonderful breed should remember that the reserves of power inherent in the nature of the Rottweiler need daily stress and training.  Only by wasting its energy, your pet will be able to feel comfortable.  And you will be more athletic next to such a handsome athlete.  So if you are jogging, the Rottweiler will be the perfect company for you.  As for training, the Rottweiler is a very intelligible and disciplined dog.  Training should not be too harsh so that the dog does not lose confidence in the trainer and does not accumulate unnecessary aggression.  Excessive “blind” love for the Rottweiler can lead to disastrous results.  It is necessary to work with the character of a Rottweiler correctly, the opinion that this is a male dog is a myth, both men and women can work with them, but a certain strategy is needed, and the services of a professional are desirable.  Therefore, if you are a novice dog breeder, you better pay attention to other breeds.

What are Rottweilers sick with?  Rottweilers, like other dog breeds, are susceptible to various diseases.  Timely vaccination protects the dog’s body from some infectious diseases.  Regular preventive examinations and consultations with veterinarians will help keep your pet healthy for many years.  For Rottweilers, as well as for other breeds of dogs, diseases are characteristics that are most common in this particular breed.  So, it is believed that the first place among congenital diseases in Rottweilers is heart disease.  With this disease, many puppies do not live up to six months or are doomed to special care and life-long treatment.  As for diseases of the urinary organs, cystitis and pyelonephritis are most often found in Rottweilers.  From the list of diseases of the nervous system, encephalitis and epilepsy are distinguished for this breed. All these cases are rare and treatable by meds for dogs. They could be bought in Online Veterinary Pharmacy.

The Rottweiler is nobility itself.  By making him a member of your family, you will gain a loyal friend, a brave defender, and a strong helper who can support you in difficult times.  You can find out more information about different breeds of dogs on our website.

Here you can find a lot of Online Veterinary Supplies for your pet. There are not only toys and sports requisites in Online Pet Pharmacy, but also many other things.